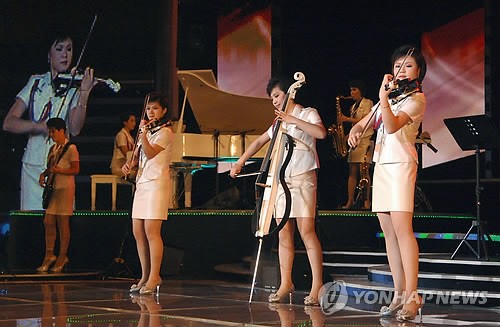 …except their songs are all about 1 thing.

The Moranbong Band, whose members were chosen by Kim Jong Un himself, are North Korea’s first all-girl band.

They debuted in 2012, often performing for Pyongyang’s elite.

The girls often play instruments themselves while wearing military uniforms as they perform their unique blend of patriotic pop/rock.

Most of their songs are aimed at praising their leader and glorifying his rule.

Some of their most popular include “O My Motherland Full of Hope”, “Let’s Support Our Supreme Commander with Arms”, and “Let’s Learn”.

They have become so popular in the country that they even planned to perform abroad in China.