Suzy has revealed the toughest things about being a celebrity during a deep and meaningful conversation with her best friend, Kim Ga Yeon.

On Off the Rec.SUZY, Suzy and her best friend Kim Ga Yeon spent a whole day together, visiting the mall and trying out different street foods, as well as enjoying dinner with some drinks.

After dinner, the two went back to Suzy’s place and enjoyed more soju and snacks. It was in the comfort of her own home Suzy was able to truthfully reveal what she thought was the hardest part about being a celebrity was, with the help of a little alcohol.

Suzy’s best friend asked her, “Do you regret debuting so early?” to which Suzy revealed that she doesn’t regret debuting at the age of 17, but there are times when she wonders how different things would have been if she hadn’t. 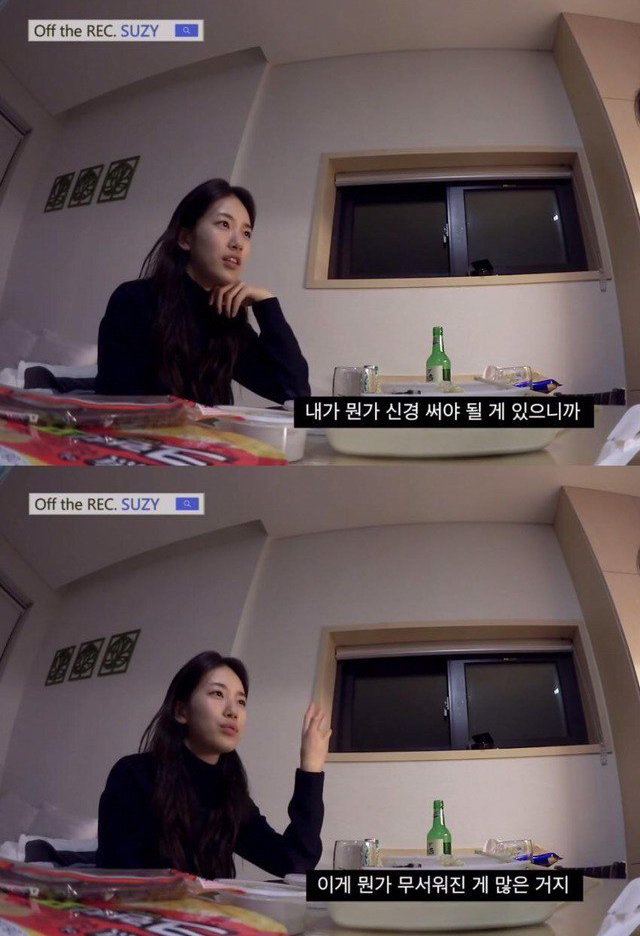 “There are a few things I get sad about. There’s the saying ‘skipping over your childhood is the scariest’, and I think it’s so true. If you say I’m successful for starting so early, then I guess that’s true, too. I’ve received a lot of love and support, but it’s not like I can just quit now.”

“There are more things to work on, but I’m scared I’m going to tire out too soon. There are so many things I have to worry about and I have so much to lose. So this job has become so scary for me. I can’t even take a photo with someone without having to worry about whether the public will think I’m showing off or overdoing it. But it’s so hard to satisfy everyone. So I just think, it’s not really worth doing anything that can be talked about… Because it just drains me.”

To this, Kim Ga Yeon commended her for always being cautious and careful, but also warned Suzy that her habit of scrolling through comments could be damaging to her well-being.

Ga Yeon: It’s really good that you’re being careful, and I know that responsibility comes with your occupation, but you’re always on your phone and scrolling through comments.

Suzy: Yeah. There are times where I’m just scrolling through comments for hours on end, reading them.

Ga Yeon: I think there’s no point in reading those if it’s hurting you. You need to stop looking at your phone so much, you read it so much I feel like your body feeds off electromagnetic waves.

Afterward, Ga Yeon asked a follow-up question on when Suzy wants to get married, and whether she thinks she’ll still be working in the entertainment industry when she does get married.

Suzy then showed another difficulty of being a celebrity with her answer, in that it was an unstable and unpredictable occupation.

Ga Yeon: Let’s say you got married at the age of 31. Do you think you’ll be doing the same job?

Suzy: Regardless of whether I get married or not, I don’t know when I’ll be doing this until. There’s no certainty in this field, I mean we’re not even sure about what’s going to happen tomorrow.

Watch the full episode of Suzy’s Off The Record Below