Park Bom issued a clarification of her voting proof after receiving criticism over it.

Many celebrities posted photos of their trip to the polling centers when they voted for their new president on May 9. Most posted about their experience on electing their new president, especially younger people who were eager to be voting for the first time.

Park Bom’s initial post, however, received quite an unexpected controversy after she posted authentication shots of herself voting through social media platforms such as Twitter and Instagram.

The original caption stated it was her first time voting.

“I voted for the first time in my life.”
– Park Bom

The voting age in South Korea is 18 years old. Born in 1984, this makes Park Bom 33 years old. Although she was defended by fans to have lived in a foreign country since she was a child, many criticized her for her claim that this was her first time voting.

Aware of the criticisms over her post, Park Bom issued a clarification a day later. She edited the original post with a new caption, clarifying it wasn’t her first time voting overall.

“I voted alone for the first time in my life.”
– Park Bom 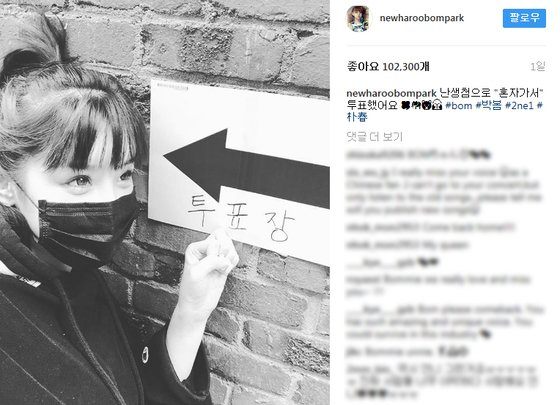 She also replied to one comment and further explained.

“Huh? I meant it was my first time that I went alone in my life ㅠㅠ after making my passport ㅠㅠ.”
– Park Bom

10+ Of The Funniest Memes And Tweet Reactions To GOT7’s “Construction Era,” Courtesy Of Ahgases

Showing Appreciation For The Numerous Piercings Of Stray Kids’ Members

10 K-Pop Idols That No One Is Allowed To Dislike, According To Fans

TXT’s Beomgyu Didn’t Want To Get Fired By Bang Si Hyuk, So He Pinned It All On Soobin