A gossip Weibo page started the rumor on the night of March 2nd, which wrote, “EXO’s member Huang Zitao nullifies his contract with SM Entertainment and signs with Huayi Brothers. He will also star in the movie version of ‘My Sunshine’ (aka He Yi Sheng Xiao Mo/ Silent Separation).”

Although it is true that Tao has joined the casts in the Chinese movie which will be released on May 1st, there has been no official statement that Tao has left SM Entertainment or has signed with Huayi Brothers.

The manager of Chinese actor Huang Xiaoming denied the rumors, stating, “False news could also be sold as widely-spread news, looks like some organization is having some plans. We should just quietly film a good movie. @Huangxiaoming @Huangzitao.” He also attached a photo of a Chinese character that read “Go away.”

Huang Xiaoming is signed under Huayi Brothers and is also acting alongside Tao in the same Chinese movie, hence was rumored to be the one who connected Tao with a contract in China.

Not only have Tao and Huang Xiaoming spent much time in China together, when Huang Xiaoming went to Korea on a vacation with girlfriend Angelababy, Tao also accompanied them to go shopping.

“Tao contract nullification” has also been trending on Weibo, as many are currently discussing the topic.

Meanwhile, EXO is preparing for a comeback and is expected to introduce their comeback track at their upcoming concert EXO PLANET #2 – The EXO’luXion. 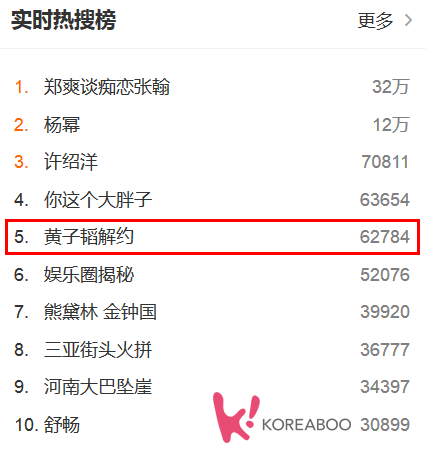