Actress Seo Yae Ji revealed in a recent interview that she was required to breathe in toxic gas for her role in a movie, causing an uproar among her fans.

In a recent interview with Star News, Seo Yae Ji talked about her role in the film Another Way, which shares an incredible story of a man and woman who help each other to heal their mental scars as they journey through life together.

In this interview, Seo Yae Ji revealed that director Cho Chang Ho asked her if she could breathe in real briquette gas for the movie. Briquette gas is used to fuel old heaters and is known to be extremely toxic when inhaled. The gas is often described as being incredibly dangerous.

“Charcoal briquettes are particularly dangerous as they are designed to smolder rather than burst into flame and are also good sources for carbon monoxide.”

The scene being shot was one of the bigger moments of the movie, where Seo Yae Ji’s character attempts to commit suicide.

In the interview, Seo Yae Ji revealed what the Director told her to do when asking her to go through the painful process of breathing in briquette gas.

“I want you to portray the exact same feeling and emotions as the main character when she breathes in the briquette gas.”

Seo Yae Ji explained she had agreed to this request as she wanted to ensure the feelings of the character was properly seen by viewers.

“I told him I would do it to feel the same pain as the main character… As soon as they burned the briquette, I got in to the car (full of the gas), and it felt like hell. I was physically suffering, but I was mentally fine. It really did feel like I was going to die peacefully.”

She went on to reveal the intensity in which many other scenes were filmed. In one scene, Seo Yae Ji was asked to drive into oncoming traffic, which almost resulted in a car accident.

In another interview with the cast and director present, it was revealed that the male lead, Kim Jae Wook, had to smash in a car window to save Seo Yae Ji. Unfortunately, he was not informed that the glass was real and believed it was made of sugar as scenes similar to this are usually prepared. The mix-up resulted in the actor receiving a bloody, cut-up hand.

When discussing these moments, Director Cho Chang Ho simply laughed and said he did not remember these incidents. He justified the car smashing incident by saying Kim Jae Wook failed to break the glass properly which is why he was injured.

Upon hearing of the news Actress Kim Yeo Jin expressed her anger via Twitter at the carelessness of the Director and the danger he placed Seo Yae Ji in with his act. Kim Yeo Jin is well known for being an activist and outspoken defender of social justice.

Read her translated tweets below:

“Actors are people who ‘act’. They need to immerse themselves in all sorts of emotions and situations and later escape them. They also calculate things in detail on a complete scale at times and at times on a scale of fractions. If you want to put [actors] in real danger and want to capture real humiliation on camera, please make a documentary. If my safety is not guaranteed, I become tense. I cannot focus completely [on acting].

Raw? It’s raw alright. The ‘raw’ that seeps through the debris after a ‘character’ that an actor has built inside themselves, brick by brick, through their interpretation of the scenario and their experiences on set. Is that art? Take a look at your result. See who the camera truly captured in that scene.”

Following this response by the actress, many news outlets reached out to director Cho Chang Ho for more details on how exactly this scene had been filmed.

In response, he posted an official apology on his Twitter:

“My approach was wrong. It truly was a problem that occurred during the production of the film, even though we tried our best to be careful and inspect everything; it is true we fell short on this. Even though we fell short, we would like to first mention that we made this film through our own communication process before we reveal any more detailed information.” 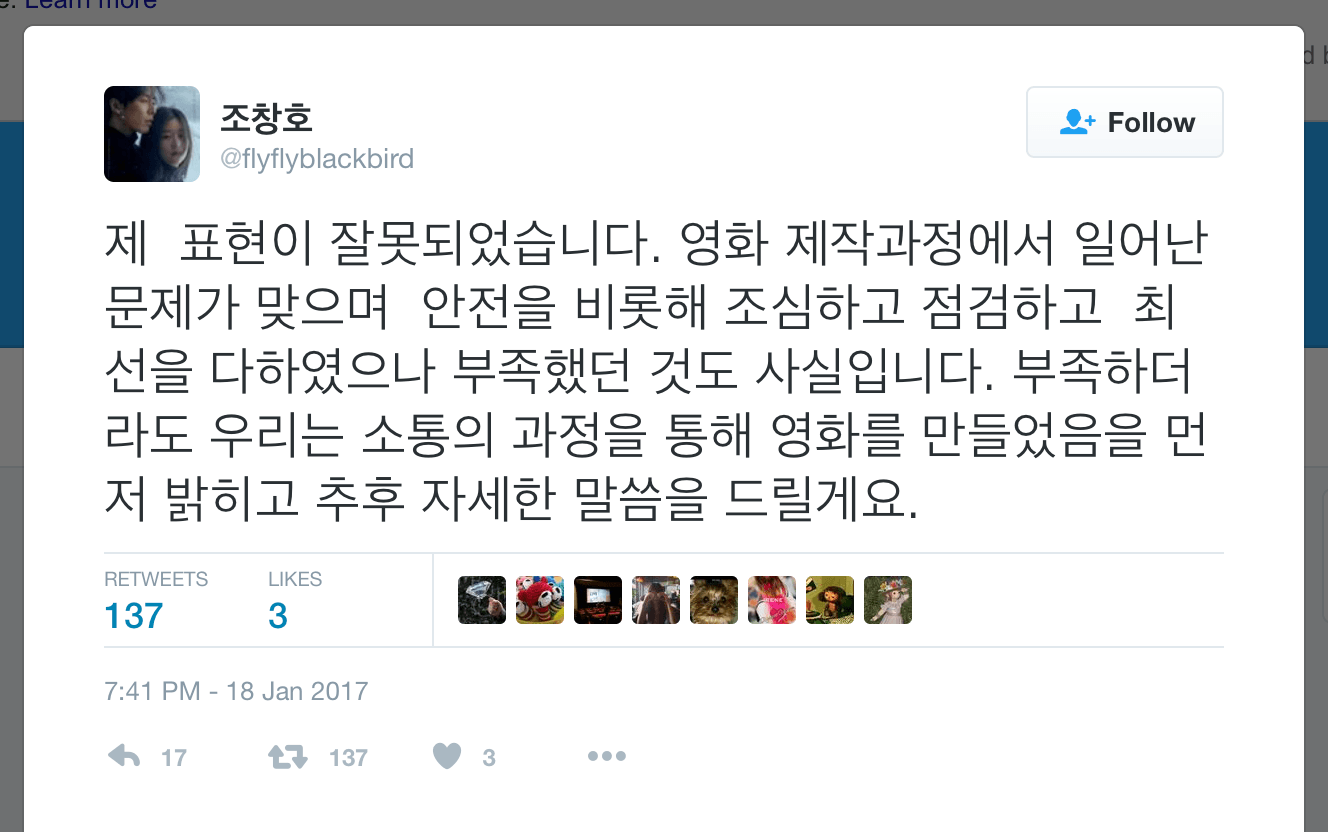