Fandom wars are always created by the immature fans of each fandoms. Also, there are many people who pretend to belong in a specific fandom and post malicious comments in order to start fan wars between groups that they dislike. But which groups are recently being hated by their fans’ alleged comments or actions?

Originally posted on Pann, netizens claim that Lovelyz is being hated by the actions of their fans.

Titled “Why Are Lovelyz Fans Liek This,” here is the direct translation of the post and comments below. 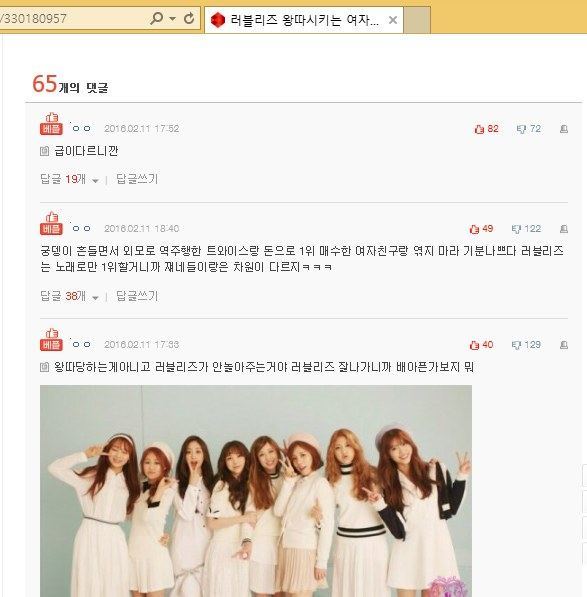 [ +49 / -122] Lovelyz is better than TWICE who shake their butts and push with their physical appearance to gain popularity. Also better than G-Friend who bought their way into getting 1st place with money. Don’t mix them with Lovelyz, it is maddening me. Lovelyz will only try to get 1st place with their music so they are at a different level than TWICE or G-friend.

[ +40 / -120] They’re not picking on Lovelyz but it is because we won’t play with them. Since Lovelyz is doing so well, I guess that is why people are trying to criticize them.

They say TWICE is popular due to shake their butts and G-Friend won first place by buying their way hahahahaahha Isn’t this absurd? I hate how Lovelyz praise their artist so much to the point that they diss other artists. There were posts comparing legs of Lovelyz and Red Velvet in which they would insult Red Velvet. Also, they keep claiming G-friend is uglier than Lovelyz.

And then their artist get criticized, they keep accusing people of rigging or pretending to be some other fandom hahahaahahahhahahaaha

[ +102 / -107] They diss G-friend because they have a small fandom. And for groups like Red Velvet and TWICE, they keep making up bullsh*t in order to insult them. I saw their post in comparing Lovelyz and G-Friend’s appearance. There was so many likes on comments that claim Lovelyz was way prettier than G-friend. Also, the comment section was spammed by photos of Lovelyz. This bs is way too funny.

[ +91 / -107] Lovelyz really discriminates on other fandoms. They look up to and can’t do anything to fan groups of Girls’ Generation and A Pink but they always pick on small fandoms like G-friend’s.

Why BLACKPINK’s Jisoo Succeeded Over Other YG Entertainment Trainees, In Her Own Words